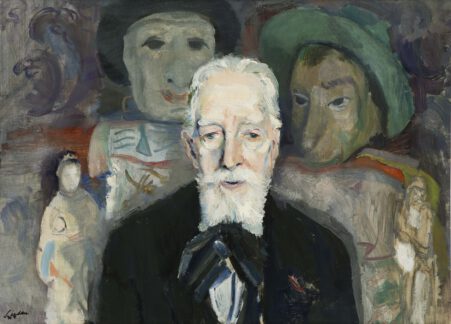 Ernst already became familiar with the work of Eugène Berman (1899-1972 a painter of Russian descent) in Paris in 1927. Ernst has been staying regularly in the French metropolis since 1925 and had his own studio there. Although the Van Leydens are not counted among the Neo-Romantics, there is certainly a relationship or even influence. The tone of the portraits around the 40s of Ernst (for example of James Ensor, Bertolt Brecht and Helene Weigel and of Thomas Mann) and of Karin (such as Gloria Vanderbilt (1924)) is very similar to the working method of Eugène Berman and his colleagues. For the Van Leydens, this part of their oeuvre can be regarded as an intermediate or transitional phase, in which they confirmed themselves to the conservative, conventional taste of their clients.