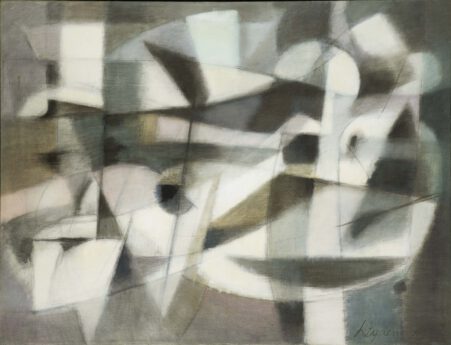 A few years after the second world war Ernst van Leyden, now an American citizen, started with abstract art.  One can classify his abstract art into different phases. First came the phase of the whispering abstraction (1956-1959), in which the artist is primarily focused on soft, intimate colors and shapes, the atmospheric and poetic refinement prevailed and titles were particularly puzzling.
Torn abstraction (collages, including second female undergarments got an important place in his paintings) (1960 to 1964) followed, and the non-figurative period ended with the meditative abstraction (1966-1969). Typical of the form language of this vast ensemble of paintings and lithographs are using a geometric imagery with circle, triangle and square, the layering (transparency), integrating words in the composition, the use of a palette of bright colors and experimenting with various unorthodox printing, which include templates of various machine parts were used. In this final stage of life, however, he particularly inspired by the experience he gained during an extensive journey through countries in the Far East and Eastern scriptures which he then took notice. Most of the works from the stage of meditative abstraction can therefore be considered. As pure yantras They form a symbolic representation of various aspects of the figure of the deity. The composition is made up of an interlocking matrix of geometric figures and patterns of seeds and (lotus) flowers. Yantra can be regarded as a continuation of a long tradition, which set rules underpinning. Within these rules, however, Ernst was excellent from the feet.